For the delectation of the passer-by, and the perusal of lovely things, here is a selection of photos I took as we wandered hither and thither. 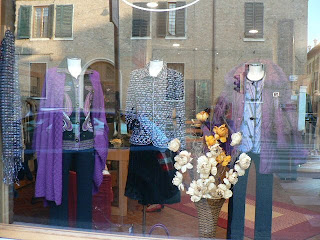 Inevitably on our way to the various museums, galleries, churches, ruins, etcetera, we passed many shops. I am not complaining. While not the shopper I used to be when I was still slender, it is enjoyable to look at what is on offer in the shops. I perambulate around the Queen Victoria building and around department stores, but in the last few years find that fashion appeals to me less and less, partly because so many clothes are very unflattering to many women, and secondly because the fabrics used are so tizzy and of such poor quality.
In Italy, where such deficiencies are less common, it was a pleasure to window shop. The displays are elegant and gorgeous. Purple is the colour of the season and there is absolutely nothing wrong with purple. Jewellery shops abound, as well as a goodly selection of shops catering to the many and varied passions of the female.
I wanted to visit Ferrara because of my interest in Lucrezia Borgia. My Italian class studied and translated a biography of Lucrezia, who did not have an easy life. She was the illegitimate daughter of Rodrigo Borgia, who became Pope Alexander VI, and sister of Cesare Borgia, upon whose life and career Niccolo Machiavelli based his seminal work, The Prince. Lucrezia was not the wicked woman so often depicted. Her second husband, whom she loved, was murdered by her brother. Her third marriage, made for political reasons, as was customary, was to Alfonso, the heir to the Duchy of Ferrara. Alfonso was a notable soldier, obsessed by developments in armaments, at a time when the French had invaded Italy, causing massive political instability.
Upon her marriage Lucrezia was obliged to leave behind her infant son, and never saw him again. He died young. She had numerous pregnancies, which were always difficult, and the last one killed her. In those days there was no notion of giving a woman time to recover from miscarriage or childbirth. The sooner she could be impregnated again, the better.
We sought out the convent where Lucrezia was buried, but it was closed for restoration. There is a fascinating account of Ferrara, the Este family and Lucrezia in H V Morton's A Traveller in Italy (published in 1964, I picked it up a year ago at a second-hand book stall) and he managed to gain entry, at a time when the nuns still observed enclosure rule.
These shops are in Ferrara, a city of about 40,000 people. We stayed in the historic centre, close to the Castello Estense. It was a notable cultural and literary centre during the Renaissance. Ferrara is lovely. Outside the walls people drive their cars, but around the historic centre, they walk or ride bicycles. Naturally they talk on their mobile phones as they cycle along. 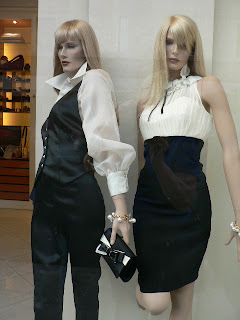 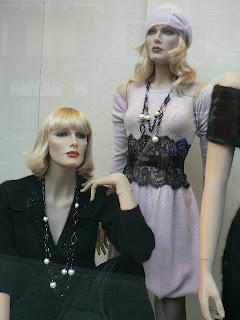 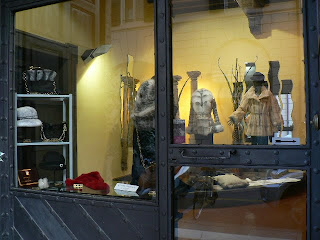 I liked the combination of this revealing neckline, notwithstanding the swathing of the neck itself. 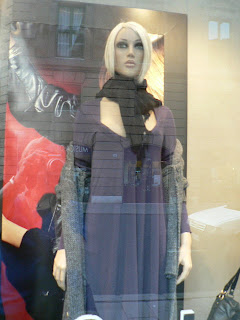 Here is food for the body. We passed this shop in the very narrow main street of Bergamo's Citta Alta. It all looked delicious, and was very crowded, so that it would have taken ages to actually buy anything. Bergamo features lots of cakes, but we did not try any of them. They had a cake made of polenta, but I am afraid the very thought made me shudder. The meringues looked good though. As we walked past the shop some time later we espied a fly in the window, which put us off a bit. 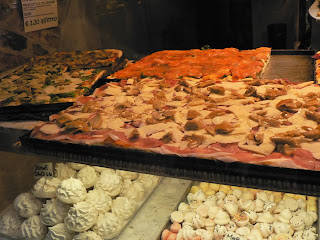 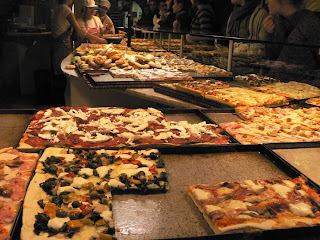 This is a wool shop in Brescia. We did actually go inside, and perved and yearned over the gorgeous yarns - the cashmere, the alpaca, the silk blends. I might have bought some if only I had had a pattern in mind, and knew how much to buy. On the other hand my suitcase was already quite heavy enough. 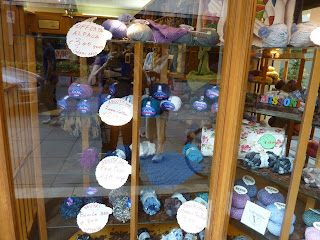 This is a shop from the fearsomely expensive Galleria Vittorio Emanuele II in Milan, just near the Duomo. I don't really go for silver, but these were elegant and sumptuous. The shop also sold a range of the lovely silver and enamelled animals which are sold in Florence. I think the prices in Milan easily exceed those in Florence. I had already bought two small ones in Florence, a boar, and an owl. It took my granddaughter about five minutes last week to spot that there were a couple of new ones. She'd like to nick off with them. She has to wait, though. 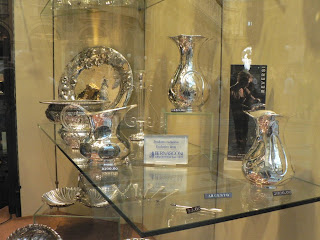 Finally, the Ricordi music store. Ricordi was Verdi's publisher, and so the world owes his memory some respect. It is a lovely shop and as we had some time to kill on our last day in Italy, we stayed there over an hour looking at all the CDs and books. It was not a bad way to end our trip. 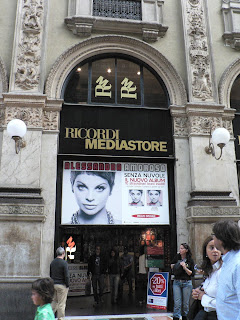 WE went into that beautiful silverware shop in GVE as well! It was exactly as you say... not usually my thing, but I appreciate the craftmanship and the prices were not bad either, for the location and quality. If one HAD needed a special gift at that time....

Oh look at those yummy goodies!!!!

exVery interesting post.
I love the way I no longer care about fashion, & am happy to feel comfortable & clean! I remember the phrase 'Clean & well paid for" from my grandmother.
I would have enjoyed window shopping at the sights you saw.