Moving forwards, and back 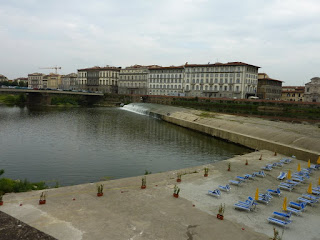 Naturally I have managed to get the photos in the wrong order of the trip, but such errors must be endured. The photos above and below are of the Arno River. It does not matter how often I visit the wonderful city of Florence - and believe me, it is not nearly often enough - I keep taking photos of the river and its bridges. This photo with the large concreted area is something I never spotted before. It is a pescaia - a sort of weir, and there is another one, according to my map, further upstream. How long has it been there, I wonder? It is downstream from Ponte della Trinita, roughly between the churches of Ognissanti, and San Frediano on the opposite, or Oltrarno side. I had never managed to get to these churches before, and as we came away from San Frediano on the Sunday morning before Mass was held, we peered over the embankment wall, and noticed all this. It is evidently a fishing spot, and there is a man in waders in the water on the far side fishing. The Arno is probably fairly polluted, so do they fish for sport or food, or both? I am perplexed about the large concreted area with all the chairs. 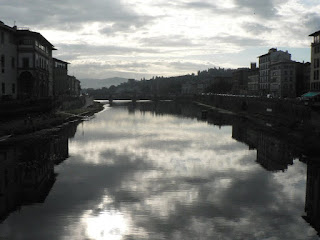 I like this photo for the reflection of the sky. 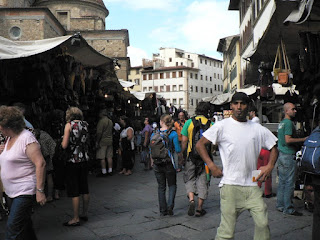 This is the mercato of San Lorenzo, and we were on our way to visit the church of San Lorenzo, the Medicean chapels and the Laurentian Library. The chapels and the Library were closed on my previous visits. As we walked through, the man with his arms akimbo posed, so we cheered and waved. He will never know he is on my blog.
San Lorenzo is a Brunelleschi (the Duomo dome architect) church, built as the Medici local church for Cosimo il Vecchio, who did not go in for splendour, but for lack of ostentation and modest living. Effective power rather than its pomps was enough for him. The local stone of Florence is known as pietra serena, and it is indeed cool and serene, with an austere beauty, with the church owing as much to the balance and perfection of its proportions as to the materials and decorations used.
The chapels, with the Michelangelo statues of Night and Day, and Dusk and Dawn, are wonderful, and Michelangelo has the same wonderful proportions and balance in his architecture. The other chapel, despised by Oscar Wilde, is a riot of coloured marbles and feature highly decorative pietra dura work. I am a sucker for gorgeous marbles and stones (as a child I wandered around cemeteries and monumental masons), and cannot equal Oscar Wilde's refinement and sensitivity. It is really a very very Baroque interior.
For the first time we visited the Laurentian Library, with the staircase designed by Michelangelo. Beautiful as it is, the interior of the Library excelled it, and it is a monument to literacy and learning. There was an exhibition of the development of writing and the development of alphabets, and of books from basic commercial records to literature, copies of ancient works, illuminated manuscripts of incredible beauty and perfect scripts to the development of printing. Seeing such antiquities and the development of learning and civilisation is inspiring and wondrous. 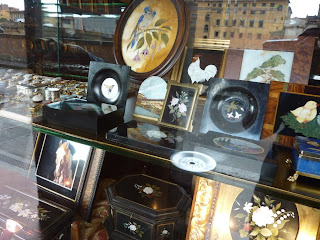 Pietra dura work is one of my minor passions, and I have two small pictures and a pendant. Very modest works, they are, but I love them. This photo is of a shop window selling pietra dura. On the Oltrarno, where our hotel is, there are several shops and workshops, where I always linger. There is also a museum, Opificio delle Pietre Dure, and lots of it on display in the Pitti Palace and the Uffizi. It is incredibly detailed work, making pictures of scenery, birds, flowers, using semi-precious stones. 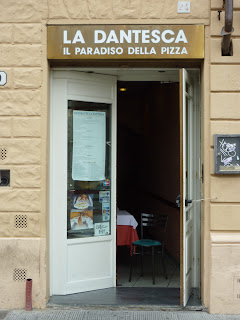 As one of my Italian classes is studying Dante, oh so slowly, I could not resist this pizzeria in the city of Dante's birth. 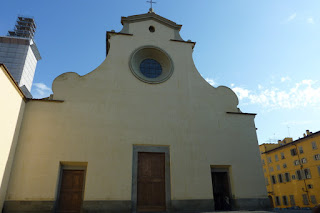 This is the facade of the church of Santo Spirito, designed by Brunelleschi, but not completed by him. Like San Lorenzo, the interior is serene and beautiful. A Baroque baldacchino was put in place many years later. Some think it spoils the church, but I say the church is pretty hard to spoil, and I rather like it. 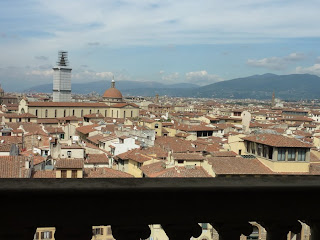 A view of Florence from the Pitti Palace. I managed to get approval from the attendant to take a photo from the little balcony. In this part of the Pitti Palace visitors kept having to lean forward so as to read the name of the painter and the title of the work. This leaning kept setting off the alarms, but fortunately the attendants were quite sympathetic and understanding. We explained that we were getting on a bit and our eyesight was not what it was. They nodded understandingly.
Indeed we found that despite there being treasures left, right and centre everywhere we went, the security was not of the officious and obnoxious kind encountered in Australian galleries. We were able to peer and get up close, and point at things in a picture. Bags were not permitted as a rule, and taking photos was prohibited - not that such prohibitions or any reminders ever stopped your average culture lover and camera enthusiastic from flashing away there, because of course such rules cannot possibly mean me myself personally - oh no! 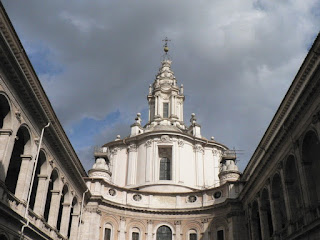 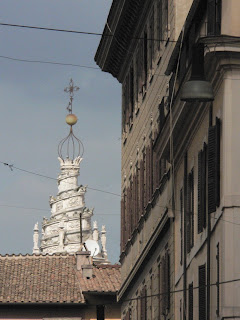 Back in Rome, which is where I meant to resume. These two photos are of the church of St Ivo della Sapienzia, a Borromini church, notable for its spiral belfry, and (according to the guide book) for its astonishing complexity, and an ingenious combination of concave and convex surfaces. Borromini and Bernini worked together, but then fell out, and were rivals. But the two of them made Rome what it is today. Borromini was a complicated and difficult man, and in his later years suffered from feverish melancholia. This eventually led him to fall on his sword, but he did not die immediately and suffered horribly.
Posted by persiflage at 12:42

The Pitti Palace is a tricky place for setting off the alarms! We did the same thing.

I recognised the San Lorenzo mercato! Isn't it wonderful? And I agree with you about the Medici chapel...it is quite staggering, an absolute masterpiece in pietra dura, if gaudy. Did you go into the reliquary? Bizarre things they are....and we have a soft spot for the basketweave casket in the San Lorenzo chapel as well. The interior was quite interesting, along with the Donatelli (?) woodcarved altarpieces.

Ah, Italy, you'd never feel you'd finished with it, really. I'd go back ANY time!

Ah, Florence - it's on the list of places we must go. I'm interested in your Rome pictures - you seem to have done things that we didn't, last year. The world is too big and there's too little time to see it!

I agree with Isabelle. Too large, too little time!

I recognised Florence and the Arno instantly. Another great post, and now you've set me off longing -- I feel a need to read A Room with a View again, or something else with a Florentine flavour!

I had a suspicion before, but now I'm convinced. I'm living in a wasteland! I have a serious case of Italy envy!
I do hope you rewarded your poser by at least buying him a belt to hold up his trousers?

Love the photos, thank you for taking me along with you there!