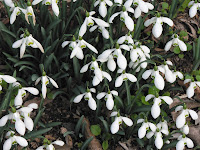 This is for Isabelle:my friend's lovely clump of snowdrops. They are seldom seen in Australia. They are dazzlingly white. 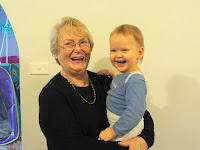 My youngest - and possibly my last grandchild. He is a happy little boy. 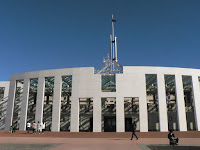 The front of Parliament House in Canberra. The facade is white marble - Carrara, I think, and the flagpole a metal structure reaching high above the building, which is partially covered by grass. 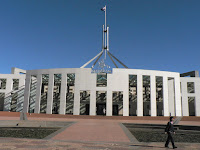 These are the wonderful wooden marquetry, using Australian timbers, around the Great hall of Parliament House. There are other marquetry works in the Cabinet Room - which is not open to the public, but I saw them before the building was finished. There are marquetry insects in there - a conceit, as the room is subject to security measures. 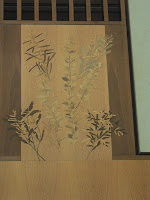 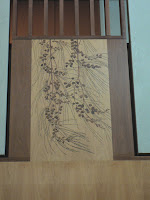 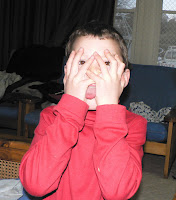 Ten inch crocheted squares made to use up wool scraps, for the Australian Broadcasting Corporation's sponsored Knit-In, at which lots of people join together to knit and join squares to make wraps to send to people in poor countries. I made enough squares for a wrap - or blanket, but did not have enough time to join them all together, so managed to do the long strips so as to make the best arrangement of the squares. Of course, once you start crocheting squares to use up all the wool scraps, you have to buy some more to get them finished. 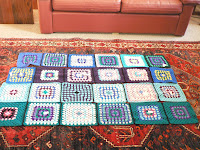 Persiflage and Stomper in Melbourne yesterday. Photo taken by Cherub. Not bad for a five year old. 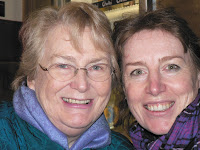 Icecreams. We went in search of Charmain's, which had the most superb icecream - but it seems to have vanished. These icecreams were not nearly as good. 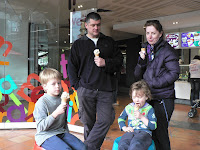 This is the amazing gymea lily. It grows on a very long stem and is a large flower. It comes from New South Wales and there are lots growing around Sydney, but I was astonished to see it being grown in Melbourne, near the Arts complex of buildings in Southgate, on the Yarra River. 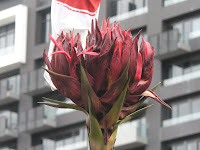 I have lots to write about, but have spent the evening doing domestic things, and writing my topic for tomorrow's Italian class. The topic? Melbourne!
I am glad to be home, but sad to leave my family there.
Posted by persiflage at 23:40

Labels: And so to bed

Those snowdrops are gorgeous, especially when you click on the pic so it fills the screen! Nothing like grandchildren and ice cream to make us smile!

Wonderful pics! How happy you look with Stomper. Grandchildren are just the best, facepulling or not.

They're MY snowdrops, Molly. Hands off. Thank you so much, Persiflage!

Snowdrops in August seem SO peculiar to me. Pretty, but very very strange. I wonder if I'll ever get to Australia to be confused by them in the ... flesh. Petal.

Grandchildren do seem an excellent idea at any time of year, however. If only I had some.

Isabelle, you can come to Canberra with me and meet my friend - she is/was English and loves all the bulbs and perennials. We used to buy bulbs together from specialist nurseries.
If you'd been in Canberra with me you would have found it quite cold enough for snowdrops - and it does snow there occasionally.
As for grandchildren I recommend making (how?) their parents live close by!