Tomorrow the WSD and family arrive in Australia. They are staying with friends, and we do not know yet when we will see them. There was a phone call the other day from her husband - presumably he rang in case I answered the phone. I did - I am the able bodied person who does all the work around here. I put the phone on speaker, and gave it to Dr P, and then the daughter came to the phone. She was quite monosyllabic.
It would be good to say I feel relaxed and comfortable about this visit, but it would not be true. I feel sick with apprehension, although I am trying hard not to go over the whole sorry history in my mind, and am determined to stick to a strategy to handle whatever might arise.
She might be surprised to see me, as Dr P told her I was going to Canberra. I am, but not till Saturday, as I have to take Dr P to a medical appointment, and as he is getting very forgetful, I need to know what is said and done. Yesterday I consulted my psychologist about advisable strategies, and we decided that it would be best not to refer to the exchange of letters, but to be at home in my own home and act as the lady of the house, perhaps remarking how sensible it was of them to decide to stay elsewhere, because of Dr P's finding it difficult these days to have house guests. We will see how it goes! I certainly do not intend to rehash the whole affair, or to be trapped into defending myself. I hope I can stick to that resolution. I'd really like just to hibernate for the duration. I will be observing the conversational dynamics, and expect that it will be one-way and not at all reciprocal.
There was confusion about the date of this doctor's appointment. Initially they said Thursday, then said Friday 31 July. So that is what we wrote down. Then yesterday we got a reminder call saying Thursday, so I rang to check his morning and they said, Yes, it is indeed Thursday. This means I had to cancel an arrangement to go to a dress rehearsal, and nor can I go to the Thursday art history lecture.
It would be really nice if Dr P was prepared to stand up for me, and tell her to treat me with respect, but this won't happen. He is all too ready to assume I am in the wrong.
SD 3 arrives Friday morning, and by arrangement she will stay with us and keep an eye on her father, allowing me to have some time off.
Posted by persiflage at 22:48 4 comments:

Labels: Letting off steam in anticipation.

I am walking down the

Labels: And who never would be missed. How to make people screech.

Another grappling with fiddly aspects of blogging 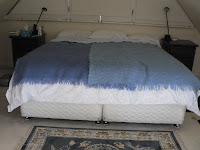 Here is a photo of my new bed, for those who asked. It is a Sealy Posturepaedic, soft rather than firm, and comes with a padded overlay to the mattress. The base comes in two parts. The overlay adds to the height of the bed, and it is quite high, so I find it is not as easy to sit on the bed in order to wriggle into a pair of panty hose. It is much more comfortable than the last bed. I did not buy the cheapest possible bed, but neither did I go to the top of the range - though I was rather tempted. It was in the high side of the middle range.
It does not look very elegant, with the two mohair throws placed over the doona, to give extra warmth, now that Sydney has been having some nice cold nights. The bedroom is at the top of the house and the ceiling follows the roofline. This means that care has to be taken not to bump the head against the ceiling - there is not much space on either side of the bed, so really a narrower bed would have been better for the protection of the head.
My second daughter and her children came to stay for a couple of days, and the four year old, Jessica, slept in my bedroom, on a mattress on the floor. The second night she woke up and cried, so I pulled her into my bed, and she steadily moved across to my side of the bed, so that I had to keep moving her back to the other side. I was quite crowded! Sleeping alone is much more restful.
We had a busy couple of days. As Dr P does not find it easy to have little kids around the house, we spent most time out of the house. We went to the aquarium and the wildlife centre. So did most other families, it being school holidays here. It took ages to get our tickets, even though we were allegedly dodging the queue by buying tickets for both the aquarium and the wildlife. The credit card machine played up - no doubt deeply shocked at the exorbitant charges having to be paid to get in. I knew it was going to be expensive, but oh boy! whoever runs these places must be raking it all in, and doubtless by now is quite filthy rich, a la Kidman or Blanchett. We had a good day, and saw many kinds of fish, sharks, stingrays, turtles, crocodiles and dugongs, but keeping an eye on little kids in such crowded and dark places is hair-raising, and at once stage I got quite fraught. I swear that while I blinked my grandson just vanished! We needed food and drink to calm ourselves down, and that was yet another opportunity to be ripped off.
After that we went to look at the wildlife and we all enjoyed it more than the aquarium, perhaps because it was considerably less crowded, and had a good look at all the nasty venomous spiders, lizards, nocturnal animals, koalas and kangaroos. We arrived just as the kangaroos were about to be fed, and both children got to pat a kangaroo. Very exciting. In Canberra we lived near open paddocks and saw lots of kangaroos, but as a rule you could not get very close: we would freeze, and look at them, and they would freeze, looking at us, but it was at a distance. And of course everyone just loves koalas. I have seen them in the wild, and it is always thrilling. Possums are rather less thrilling as they make dirty old man noises outside the bedroom window in the depths of the night. That I can do without, and also the way they wreak havoc on the plants, even my poor feeble rose bushes.
But the real hit for the children was the butterfly house where lots of gorgeous butterflies fluttered around and could from time to time be persuaded to land on the hand, so that they could be looked at close up.
It is curious to note that at both places people seemed more intent on taking photos than in actually looking at the fish or animals.
The downside of all this tramping around was that our feet became extremely sore.
On Saturday we went to a newly opened park, which was wonderful. It is large and has enough equipment to keep many families very happy indeed. The park is on the water's edge, where there used to be a dry dock. There are lovely views from the park, and I include a photo of my granddaughter.
It was a very pleasant couple of days together and we wish it happened more frequently. 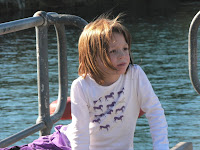 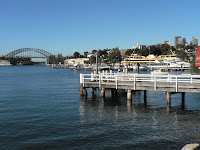 It made one gasp and stretch one's eyes