Snippets from an exhaustive photographic record 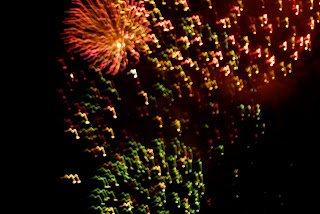 New Year's Eve. Enough of night time images now, until I find someone with enough time and patience to explain my camera to me. As it happens, I am floundering through the instructions from the additional telephones I bought at the sales. Having to re-enter all the phone numbers is a pain. There does not seem to be an option for 'Enter next contact'. No, it seems that for each contact it is necessary to re-enter the menu. What a pain. Especially after having got the phone home, having opened the box and discovering that there were no phones or bits thereof in the box, and having to return it to the shop next day. Such trivial events do a lot towards frittering away what I stubbornly insist on regarding as my valuable time.
My sister P and her daughter. There is quite a lot of red hair in my family, but it does not come from my genes, nor from my sister's. I could have sworn that my sister is/was shorter than me, but either I have shrunk, she has grown, or the camera lies. And how she bred that tall daughter is a wonder - both parents are short. That is my tiny garden in the background. 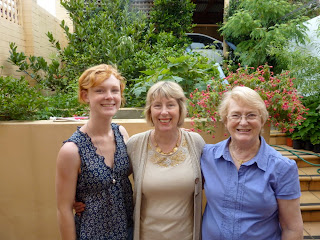 My second daughter and her children arrived before P left, so we all had an exciting drive to the airport. There have been quite a few deaths over the holiday period from rather horrific road accidents. It is hardly surprising. I drove at the speed limit and almost everyone passed me. And they all run red lights too. Sydney drivers are aggressive and dangerous idiots.
Here is my granddaughter on the ferry on our way to the zoo. By popular vote we decided not to brave the traffic, but to travel by bus and ferry. Decidedly much more fun. Jessica is wearing one of the dresses I gave her for Christmas. She is a very girly girl, wants to be a fairy princess who does ballet, and she adores bling, and swirling skirts. She can flounce and swirl to her heart's content in this dress. (I think the headgear spoils the effect somewhat.)
As soon as she arrives as Casa Persiflage she fiddles with all the ornaments, moves them around, and then rushes upstairs up to inspect my jewellery. Nothing is private! I gave her a tiny round pendant of Venetian glass, which is visible in this photo. She was thrilled. I don't think girls of four ought to have too many trinkets, but she disagrees. Her grandmother is a softy. 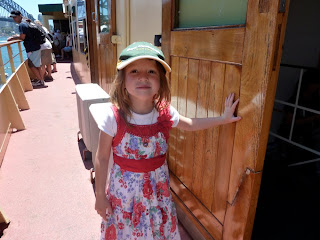 My grandson is enjoying the ferry and admiring the view. 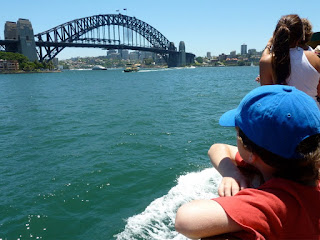 I was taking lots of photos of the harbour, the bridge and the Opera House when a couple of American tourists from Chicago offered to take one of all of us. So here it is. After this, my daughter took over the photographic work, as she is so much better at it. My camera is nowhere near as good as her SLR digital one, and thus there were frequent lamentations about all the things she could not do with mine. But hers is very very heavy, and we had children with a propensity to nick off to supervise, so did not need heavy burdens. 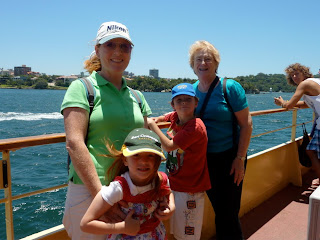 Entry to the Taronga Park Zoo is so expensive that everyone pays by credit card. I had never been to the zoo before. It is huge, and on a beautiful but very steep site. There are chair lifts to take people from the ferry to the top, so they can wend their way down, or there are buses to the top. There was a very long queue for the chair lifts so we sensibly chose the bus.
We had to go past all the reptiles, which I would cheerfully omit, but then we came to the koala house, and they are gorgeous. They sleep in the daytime. How do they manage not to fall off the branches while they sleep? 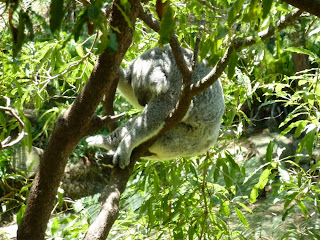 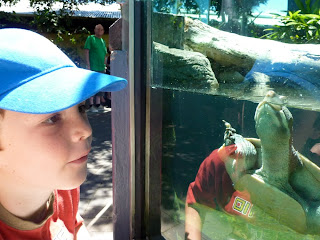 And after missing out on the seal theatre, but not on the resultant tears, we found the snow leopards. 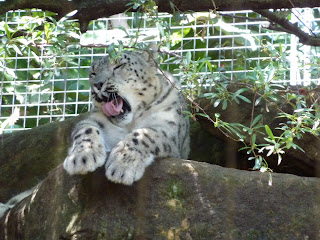 The animals we all thought were the most fun were the meerkats. I do not know how meerkats fit in to the animal kingdom: they seem to resemble cats, rats, monkeys and sharp-faced dogs! 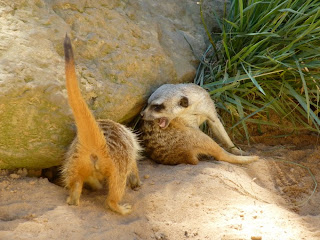 Naturally after having enjoyed a treat, booty must be obtained. Then we came home by two ferries and a bus. Quite exhausted, but a good time was had by all. 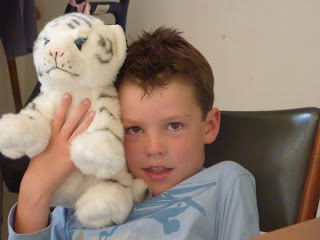 They both had haircuts today before they went home.
Now there is just us. I am tired and enjoying the quiet, after getting all the washing done, and don't yet know if/when my next sister is to arrive. It will be a busy day tomorrow. A handyman is to come and see whether the refrigerator floor space can be repaired, my car is to be serviced, and somehow normal life has to be accommodated as well. We are just about out of food. Dr P needs to be fussed over and allowed some Christmas cake.
I was so happy to have family here with me. Such a good feeling. I am still savouring it.
Posted by persiflage at 21:37

Labels: some of my loved ones

I went to Taronga Zoo with my family on Christmas Eve and we had a wonderful day out, despite the expense! I was so impressed with its location and layout and design, and how all the animals seem quite content in spacious enclosures. However I am sorry to tell you that the seal show was one of the highlights for me and it's a shame you missed it! The seals seemed to genuinely love performing and they did some very impressive tricks.

Did the little tail at the back get cut off in the haircut.? Good to see photos of them all, especially love the turtle shot.

The tail is still there. It is quite a contrast with the very short cut. He is very evidently attached to the rat's tail.

What lovely pictures! Grandchildren! - I want some...

Lovely photographs. How handsome your grandson looks with his new 'do'.
My last visit to Taronga was 13 years ago, and we took the train and ferry too. Very exhausting is how I remember it. My G'daughter told us the Gondola was the best part!
I have an upside down fridge and am very happy with it, after all, you use the fridge much more often than the freezer.