Last week I had to have a medical test, and decided to hang around until the results were ready. Just in case they showed an inoperable brain tumour. Or some such. They did not. All is clear.
So there were a couple of hours to kill, and they were killed by a lengthy browsing of the nearby trendy shops. It is a few years since I saw any of them. There used to be a good fabric shop, from which I bought much of the fabric which still lies awaiting a good occasion, and a lovely button shop. Having done such an extensive tidying up, and thus knowing full well how little I need either fabric or buttons, I gave all such temptations a miss.
I found a bookshop, where I picked up Kate Atkinson's One Good Turn.  I did not remember having read this, so promptly bought it.
Later, at home, I raced through the book, found I had indeed read it, but could not remember very much at all, and then kept re-reading it for the next couple of days, to try and get all the clues and work out what had really happened. As a reader I am too hasty, impatient, careless, and fail to take note of the significant parts. Such rueful but realistic reflections make me wonder whether these failings are characteristic of myself overall. I have a daunting and gloomy suspicion that this is indeed so. My school reports probably made comments like "Fails deplorably to observe what is going on" and 'No grasp of details" and "Too wrapped up in her own little world". No one ever kept my school reports and so I shall never know for sure the awful truth.
After the book purchase, I continued the browsing.
I found a shop which sold cards. One immediately spoke to me. 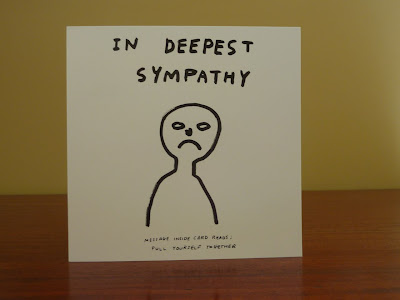 Aha, I thought, this is what I need. I bought it, took it home, removed the cellophane.
The fine print below the figure states:
Message inside card reads:
Pull yourself together. 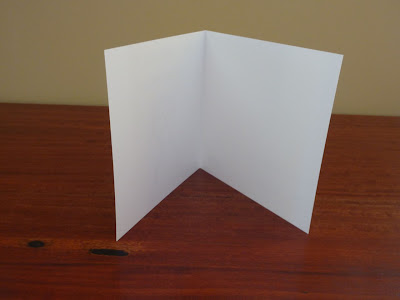 This is what was inside.
What a tease!
Posted by persiflage at 18:05

That's a cute card, despite the mixed messages! Glad your test was clear. x

how mean of them.

But then, 'pull yourself together' is rubbish advice anyway. much better have a glass of wine and a treat.

Kate Atkinson's latest is called 'Started Early, Took My Dog'. It's sitting on my 'unread pile', but it won't be long now . . . .
I love her writing.

The card made me laugh! I guess, it is black humour. I am like you with mystery plots- I think to myself, 'What clue did I miss?' 'Am I the only one that didn't get this?' Other books annoy the hell out of me by being so meandering as to bore me to sleep!
I am with Friko about the wine!!