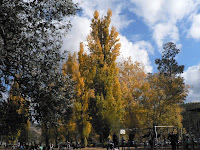 I have been mucking around trying to work with photos, but seem better at accidentally deleting them than moving them around. So here is a photo of the gorgeous autumn colours of Canberra. See below. The next photo was of the entry to the new National Portrait Gallery, but I hit the delete key once too often.
So, organisationally speaking, what follows is a bit of a mish-mash.
I visited this Gallery, which is next to the High Court of Australia building. The exterior is fairly unremarkable, but the gallery itself is great. The Portrait Gallery was for some years housed in Old Parliament House, in the space occupied formerly by the Parliamentary Library. It is not a large area, and thus could not accommodate the collection, which is now extensive. The interior is lovely, flows well and naturally from gallery to gallery, and the portraits are both interesting and impressive - I recommend it thoroughly to any visitors to Canberra. Among the portraits of notable Australians are many by some of our most famous or well known artists, and I like the one of former Prime Minister Robert Menzies by Dobell. He had a wicked touch!
Before I went to the NPG I visited Old Parliament House. The old Library space is now devoted to a Museum of Australian Democracy, which was opened that week. It is an excellent concept, but I found it rather disappointing, as to my mind there was too much emphasis given to interactive displays, which, when you interacted, did not give much more than fairly basic information. I intend to visit it again, and to make more extensive notes.
Old Parliament House overall is a great museum, and King's Hall still contains a number of portraits of former Prime Ministers, including the (I consider it to be) truly hideous one of the Prime Minister from 1996 to 2007, with his wife. I don't know why it is there, or that of his predecessor, as they would more fittingly be in New Parliament House where they both served.
Canberra looks exceptionally beautiful in autumn. In Sydney autumn is much less noticeable, although some trees are finally showing a few reddish leaves. Once you enter the Federal Highway there is a line of poplars, all showing gold foliage, and this prepares you for the splendid displays when you reach the city itself.  When Canberra was founded the Government Botanist researched suitable species for the climate - hot dry summers and cold winters - and in both autumn and spring the city looks very beautiful.
My granddaughter's party was held at the Cotter Reserve. The Cotter River was dammed near its confluence with the Murrumbidgee River to provide Canberra's water supply, and the area has been a picnic spot for many years.  We used to go there often, and swim at a couple of suitable spots on the Murrumbidgee, but it is years since I have been there, and I had forgotten how lovely it is. When my children were little there was a dearth of swimming places, but eventually pools were constructed, and after some years we lived in a medium density housing complex with a community pool.
Like many parts of Australia, the Canberra region was infested with blackberries. They were a dreadful pest, quite out of control. In my own garden a couple of plants took root and for years I tried diligently to eradicate them. Notwithstanding vigorous use of the mattock, some little piece of the root always survived. Lots of people used to go blackberrying, wearing tough (and unbecoming) old clothes and stout shoes, and keeping a good look out for snakes - I never encountered any, I am happy to say. I used to drive way past the Cotter to my favourite blackberry spot, to an area where lots of blokes on motor bikes used to ride, where I took good care to be very unobtrusive. Nobody ever knew I was out there, so if anything had happened to me, there would have been little prospect of rescue. Eventually I found a good blackberry patch closer to civilisation, which was safer. Then it would be off home with the blackberries, some to eat fresh, others to freeze, but mostly to make jam. It is fabulous stuff.
Some years later a variety of rust to which blackberries were susceptible suddenly appeared - it had been in the testing process, I think, and was probably released illegally, before all the testing had been completed. That reduced the infestations of blackberries considerably. Then when the appalling bushfires hit Canberra in 2003, destroying over 500 homes as well as much of the  surrounding bushland, blackberries were also wiped out . I don't know to what extent they may have recovered. These days I have to buy the blackberry jam. (Tomorrow I make quince jelly: the quinces are cooked and the juices slowly dripping through the jelly bag.) 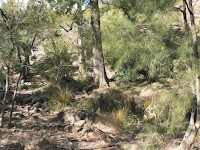 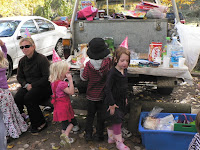 The Cotter is a wonderful place for a party for 4 year old children, as there is a large playground with lots of play equipment and the children could all run around  and did not need to be organised - just watched and supervised - and periodically they'd come back to be re-fuelled.
The children could also play around the river bed, which is rocky and easy to cross at present, due to drought.
Posted by persiflage at 23:00

I am in complete agreement about so-called "interactive" displays. They look flashy but in the end do very little and are most unhelpful. I think there's a growing trend in museums these days to be interactive and specifically to pitch at 3-12-year-olds so as to get families in the door. I was a volunteer guide at a museum in my hometown and they were always talking about interactivity and how to get more families in the door. But in every single museum I've been to, the children just run around pushing buttons and waiting for noises and lights. They never actually learn anything from the expensive interactive equipment, so what's the point? My other issue with museums is that they also seem to be moving away from a study of the past to studies of the present, with an emphasis on modern life and modern human beings. Sure, that's interesting too, but I'd rather browse cases of artefacts and mounted specimens with only simple labels than press a few buttons and be told a few simple facts about climate change that I could find anywhere.

I've never been to Canberra but would like to some day. I like the sound of the National Portrait Gallery.

Yes! I may have been overcritical in my reaction to the MAD, but I don't think so. Because of my work for many years, I know a lot about the political systems and history, and I know the sort of information which could and should be given. It was disappointing that so little was provided. Nor did the museum indicate sources of further information. And I did not see the relevance, in that museum, of a map of Australia showing the distribution of Aboriginal languages - this just seemed a trendy add-on to me.

What have Aboriginal languages to do with Australian democracy? That does seem rather unnecessary!

Have you written about Sydney museums before? I'd love to know if you have any favourites. I've only been to a couple but keep meaning to visit more.

I do love museums and galleries, and wish I spent more time doing those trips. Thnks to your inspiration I will plan a visit this weekend, I think.

I'd be fascinated to know about the Aboriginal languages, all the same.

I was very fortunate to visit Canberra twice during Autumn. On each occasion, I loved it, & the weather was perfect. We enjoyed Indian Summer, on the second visit, which icluded a visit to the Art Gallery, & the High Court for rather unappetizing disgusting food! We could not believe the learned council would stand for such substandard sustenance, but were surrounded by them, seemingly in blissful ignorance, that what they were consuming was an insult to the label of food!
I can attest to the absolute beauty of the Autumn display of colours! My dream is to visit Canberra for the Floriade. I have seen photos, but I am sure it would be so magical in reality.